The RBC Gateway tower is the tallest office building to be built downtown in 30 years.

From the start, a sleek new office tower — the tallest in 30 years in downtown Minneapolis — was going to be the biggest challenge of Rick McKelvey’s career.

That’s all on top of a street-level entrance podium with four distinct lobbies and a built-in bus stop. Architects clipped one corner of the building to create a public plaza that could someday accommodate a new streetcar station.

“This is one of the most complicated buildings in the city,” said McKelvey, senior vice president of residential development for Twin Cities-based United Properties.

And it came together amid the pandemic, which shuttered much of the downtown area, and moments of unrest after the police slaying of George Floyd and related trials.

“Once we started there was no option not to deliver this building when we said we could,” said McKelvey. “We made a promise.”

Just shy of three years after starting construction, the tower is mostly finished. Employees of RBC Wealth Management moved in Monday, passing through a multistory lobby decked out with sheets of stone and world-class art. Outside, workers put the finishing touches on the reflective glass facade. 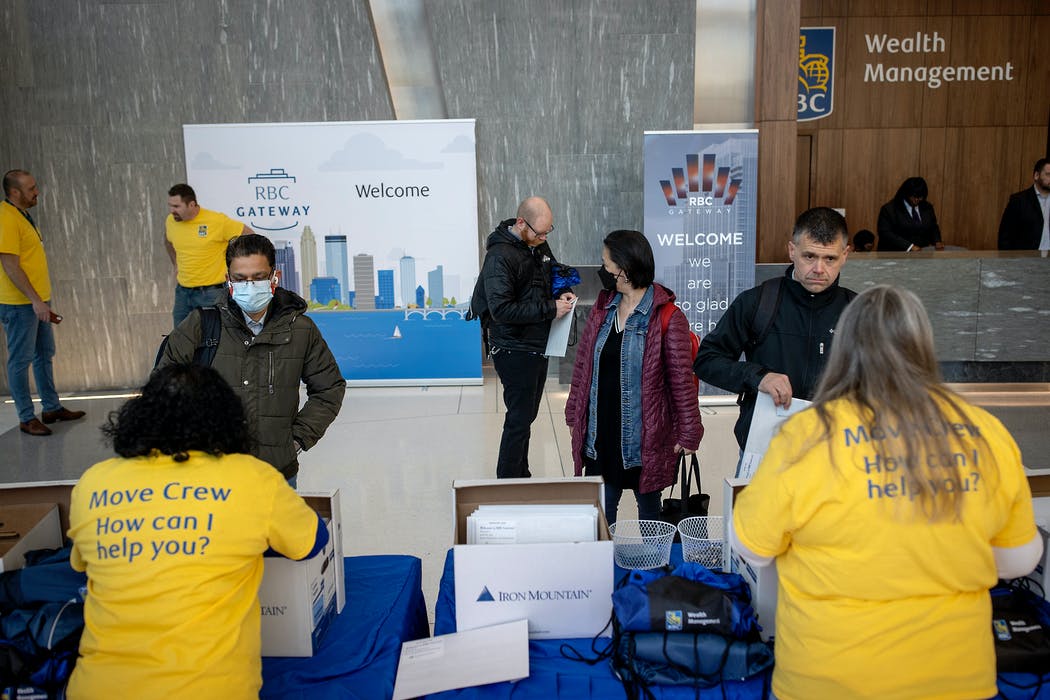 In the middle floors of the tower, hotel workers made beds and fluffed pillows. And on the top floors, crews were finishing 34 seven-figure condos that will have panoramic views of the city and Mississippi River.

The tower is expected to bring round-the-clock energy to the north end of Nicollet Mall, creating a bridge between the North Loop and Mill District neighborhoods along a section of newly developed riverfront.

Steve Cramer, president and CEO of the Minneapolis Downtown Council, said the tower is opening at the perfect time. He said it signals a total transformation of Nicollet Mall, from a time when retail dominated into what he now calls an “eclectic mixed-use street.”

“We’re battling this narrative of what’s the future of downtown and there are lots of legitimate questions,” Cramer said. “But this is not the last one [new project] that’s coming our way and the Gateway helps to symbolize that.”

Though office and apartment vacancies are still much higher than normal and the restaurant and entertainment scene is still suffering, several major development projects are already underway.

Several blocks from the Gateway, residents are moving into Eleven on the River, a 42-story condo tower where prices start at about $1 million. And in the North Loop neighborhood, construction is underway on North Loop Green, a 340,000-square-foot mixed-use development with offices and hundreds of apartments.

Still, the Gateway will test the expectations of city officials who nearly a decade ago asked developers to submit plans for a full city block that had been vacant for decades.

Known as the Nicollet Hotel block, the site was home to one of the city’s most storied hotels and is situated at what was once the gateway to the heart of downtown Minneapolis near the foot of the Hennepin Avenue bridge over the Mississippi River.

City planners asked developers to shoot for the moon with a 20-story-plus tower including commercial, retail, residential, office and hotel space. Situated at a key intersection at the apex of the North Loop, Mill District and Central Business District, the city wanted street-level retail, green space and connections to public transportation.

“We will not settle for anything short of iconic,” said Jacob Frey, now Minneapolis mayor but then a City Council member, in a letter to prospective developers eight years ago.

Of four proposals, including an 80-story tower, the city picked a United Properties proposal for a $161 million tower with offices, rentals and a Hilton/Canopy hotel.

As the market changed, so did the plan — and the cost. The budget for the built-out project rose to nearly $500 million. Condos replaced apartments. And the Four Seasons hotel chain replaced the original brand, Hilton.

RBC Wealth Management committed to making the tower its world headquarters. The offices, which account for nearly half the office space in the 1.2 million-square-foot building, will also house Pohlad Cos., which owns United Properties.

Most of the tenants who will occupy the building are already in downtown Minneapolis, so their move represents little change to the city’s commercial real estate scene.

According to a 2021 fourth-quarter report from Cushman Wakefield, about a quarter of the office space in downtown was vacant. That’s only slightly greater than the metrowide average.

Hoteliers downtown are also still dealing with the pandemic’s effects on travel, and the new Four Seasons will simply add to what is now an abundance of hotel rooms in the city.

Liz Rammer, president and CEO of Hospitality Minnesota, said the hotel occupancy rate in downtown Minneapolis was 23.4% during January. Statewide, the occupancy rate was 38.6%, while the national rate was 47.8%.

Rammer said the novelty of the region’s first five-star hotel is sure to draw more people downtown.

“That kind of property brings a lot of attention,” she said. “When you have a new property, it galvanizes the spirit and puts the focus on the good stuff that helps everybody.”

Florian Riedel, the hotel’s general manager, said its reservations system went live last week and it’s too soon to anticipate occupancy levels through the summer. But, he said, “It’s probably going to be one of the best hotels in our portfolio in North America.”

Several weddings, events and other gatherings are already in the works. Riedel said he expects the tower’s two restaurants and a coffee shop to be especially popular when so many others have closed.

“This project will be the catalyst for other residential development and desperately needed retail and restaurants in the immediate environs,” said Cynthia Froid, the downtown Minneapolis agent who is marketing the Residences at the Four Seasons. The condos range from 1,700 to 5,500 square feet with prices that start at $1.85 million.

Condos with corner locations and those with the largest floor plans were the first to sell out, Froid said. About half the buyers already live in or near downtown, while several others are coming from the suburbs.

A smaller segment, Froid said, are from out of state but have ties to Minnesota. Wherever they come from, she said, she hopes they’ll refer to their new neighborhood as the “Gateway.”

“There will be thousands of people coming in and out of this building day and night,” she said. “No other building downtown has this kind of anticipation and enthusiasm swirling around it, bringing life to a prominent block that has been dormant for three decades.”